Why you should always use DRAID

- August 03, 2019
Hello friends - I have been a bit focussed on remote copy lately so this week I would like to shake things up a bit and provide a simple explanation as to why you should always use Distributed RAID over Traditional RAID in Spectrum Virtualize products.

This is what we typically refer to as RAID in the storage industry as a whole. We aggregate drives and either stripe data or mirror it across multiple physical drives. In the Spectrum Virtualize platforms we generally support:
These RAID levels all work as they would in most other storage controllers allowing a dedicated spare drive to be used to rebuild the array in the event of a drive failure. Having an adequate number of spare drives in the system is key to keeping uptime as drives will eventually fail. The rebuild operation will read from all remaining member drives in the array and writing to the single spare drive. This means:

DRAID takes a different approach to organizing data and using spares. As a matter of writing data to the disks, you have the option of DRAID 5 or DRAID 6. These each work just like the standard RAID 5 and 6 in terms of organizing and writing out data. The change here is instead of relying on a spare drive that sits idle in the system, we integrate that drive into the array. To maintain redundancy, we reserve the capacity of one (or more) drives and divide that evenly among all the drives in the array. While the basic redundancy will match RAID 5 or 6 depending on your choice, the array will have a number of 'rebuild areas' which it can use to restore that redundancy the instant a drive fails without involving any drives outside the existing RAID set. This means:
Hopefully these points have helped to sell you on using DRAID for all of your RAID arrays. However, when using DRAID you should be aware that there are two operations that take place to restore redundancy to the array instead of one. First we have the rebuild which takes relatively little time to complete when compare to TRAID. However, when the physical drive that failed is finally replaced we perform what is called a 'copy back' operation. This performs a bit-for-bit copy of the data that was written into the rebuild area to the new drive to allow it to be substituted into the array. This allows us to free-up that rebuild area for use in the event another drive were to fail.

The last bit of information I would like to leave you with is to consider the size of your drives when picking between DRAID 5 and 6. Drives are starting to grow rather large in capacity for all classes of storage and it will take time to write out the data. With drive capacity growing and density being a growing concern in the storage industry, I would recommend to use DRAID 6 for all classes of storage to maintain the highest array-level redundancy possible.

I hope you all found this helpful and informative. If you have any questions or concerns please leave a comment, ask me on Twitter @fincherjc, or reach out to me on Linkedin.
distributed raid draid fs9100 ibm performance raid spectrum virtualize storage storwize svc v3700 v5000 v5k v7000 v7k

Popular posts from this blog 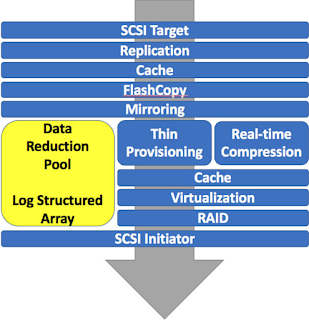 Oi meu amigos e amigas!
Many IBM Spectrum Virtualize users have been using tools like Spectrum Control or Storage Insights to monitor their storage systems for a while now. However, we see a lot of support cases regarding performance that come with very little information outside of 'a performance problem exists.' So this week, I want to share the methodology I use to troubleshoot performance for a specific volume (or volumes tied to a specific host). Please note, this blog will assume that you have Spectrum Control or Storage Insights Pro to be able to check the detailed performance data support gets in a snap.

The first step in troubleshooting any problem is acknowledging that there is one. More importantly, defining what the problem is. The information that is vital to know is:
When did the problem surface? Explicitly note the date and time.What was impacted? List off specific applications or hosts and then identify their volumes.Why is it important? Is the b…
Read more

Hello friends. For the next few weeks (while I am in a dry spell for post ideas) I am going to do a series of posts that are frequently asked questions I get from some of my peer support agents as well as others I interact with day-to-day. For the first go-around we will discuss remote copy. Specifically, what exactly is a 1920 error? How do I identify the cause of the error and stop it from happening again?

A 1920 error is a cluster error indicating that the software in the master cluster of a remote copy relationship has decided to kill remote copy for a particular relationship (and its associated consistency group) because the SLA of remote copy was violated as defined in the partnership settings.

The first and probably most important thing to know is what that SLA is and how it is defined. For this, go ahead and run lspartnership against your remote copy partnership (or check partnership properties in gui... your call). If you run lspartnersip you will see something like this:

fincherjc
I am a storage support engineer and have authored several IBM RedBooks. All posts are my own personal opinions and to not reflect the views, beliefs or values of IBM. Any guidance offered on this blog is my personal opinion and does not constitute a recommendation from IBM.